So, what are you researching? Connections between quantum entanglement and metrology

“So, what are you researching?”

The dreaded question I am asked on countless occasion. From friends, family, acquaintances, this is a very natural question to ask of somebody doing a PhD – research is both their passion and their purpose. So why do I find it so tough to articulate what I do?

Well, let me introduce myself first! I’m Tom, I have been doing my PhD in Nottingham for just over two years now and, like the rest of the group, specialise in quantum information theory. My research has focussed on quantum correlations beyond entanglement, quantum coherence, and quantification of multipartite entanglement. If you’re feeling a bit nonplussed after that last sentence, I don’t blame you! How can such abstract concepts be done justice with a simple sentence or two without explanation? This is exactly the task I face when I try to explain what I am researching to my inquisitive interrogator. As much I love what I am doing, it seems that some of the wonder is lost in my words. Whilst most of my work lies firmly within the realms of “blue skies research”, I find my explanations drawn to the more tangible applications in quantum information science like the quantum computer, quantum teleportation and cryptography. The result is an unsatisfactory jumble of hand waving explanations and brief discussions of Star Trek teleporters!

Now, using the power of this blog, I have the opportunity to give a satisfactory explanation once and for all! In my series of posts I will give accessible descriptions of some of the topics researched in our group, linking them in with some of the realistic applications of quantum information science that are gradually being introduced into the modern world. So, without further ado, on with our first topic!

Connections between quantum entanglement and metrology

Entanglement, a firm fan’s favourite amongst experimentalists and theoreticians alike, is the classic example of the counter-intuitive nature of quantum mechanics. Imagine that we have a collection, or system, of entangled quantum particles, such as photons or electrons. We say that the system is in an entangled state if we cannot describe each particle separately, instead we must describe the particles as a whole. This becomes a very strange concept if we then send these particles off to different laboratories. We can still only treat the particles as a composite, but each laboratory has their own particle, so what happens if one of the labs makes a measurement on their particle? It is famously known that in quantum mechanics, measurement causes the state of a quantum system to change (see the famous Schrodinger’s cat thought experiment, and our recent story of Alice and the Zombie Cat). So, since we cannot describe our collection of particles separately, if one of the laboratories makes a measurement on their particle, every particle in the system will “feel” this measurement and will change due to it. It doesn’t matter if the laboratories are separated by a few nanometres or a few light-years, the other particles will instantaneously react.

This is what Einstein called “spooky action at a distance”, and it caused massive headaches for him and his two friends Podolsky and Rosen. They didn’t think that the quantum interpretation was right since it seemed it would potentially allow for communication faster than light, thus breaking Einstein’s relativity, which says that the speed of light is the supreme speed limit in the universe. I’m not going to focus too much on this so-called EPR Paradox and its resolutions, which are well explained in a number of sources (see below for some links), suffice to say that it is now clear that entanglement should be taken seriously as a real phenomenon that has been experimentally verified in a number of experiments. Instead, I will briefly highlight some of the aspects of entanglement that are of interest to our group: multipartitions, local operations and classical communication (LOCC), and quantification.

Entanglement and spooky action at a distance. (Image source)

For every partition, our collection of particles will have different properties. Sometimes they will be entangled, sometimes not, so it is very important for us to identify which particular partition we are interested in. In experiments, it is very clear how many laboratories we have and how we have distributed the particles, but for theoreticians we are cursed with an irresistible urge to characterise each and every partition! 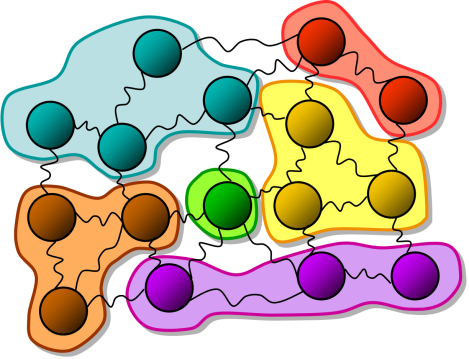 There are many ways we can partition our collection of particles. (Image source)

Now we are in a position to discuss the very powerful paradigm of local operations and classical communication (LOCC). Having set our partition, we imagine allowing each of our laboratories to do whatever they want to their own particles (local operations) and communicate with any of the other parties (classical communication) by e.g. phoning them up, or even blogging their results! LOCC is the embodiment of classicality, we aren’t using any “spooky action at a distance” by allowing each lab to do their own thing and talk to each other. If we give our labs a collection of non-entangled particles, we don’t expect them to be able to give us something entangled back. This allows us to nicely define entanglement in a more rigorous way – any state of a quantum system is entangled if we cannot create the state by using LOCC.

An example partition, where each lab has their own particle. They can do whatever they like to this particle and communicate with the other parties. Oddly enough, in the quantum information community, we often call the laboratories Alice, Bob, Charlie and so on! (Image source)

Finally, a word on quantification. Let’s say we have two collections of particles that are both entangled on a partition. Can we say that one collection is “more” entangled than the other? This turns out to be a very challenging question, both philosophically and technically. From a philosophical perspective, it all boils down to what you want to use the entanglement for, one collection may be better at one task (e.g. quantum teleportation), while the other collection may be better at something else. Technically, we may measure entanglement in a number of different ways, but it is not always clear if each way is actually useful and even worse, it can be very hard to calculate! Some of the work our group has been doing recently is to find a really easy way to come up with a lower bound to the entanglement for lots of different multipartitions. We show that if each lab does one very particular type of LOCC, they can agree on a number that is always smaller than the entanglement actually present in the collection of particles. We do this for a “family” of ways to measure entanglement that consists of measuring the distance between entangled and unentangled states. This is not a distance in the usual sense, but actually a distance between matrices, which can unsurprisingly turn out to be very counter-intuitive!

Metrology – the art of high precision measurement. Let’s start by looking at a very simple example of applying metrology to a non-quantum task, like measuring the temperature of a bath. We first find ourselves a thermometer, dip it in the water for a while, take it out and look at where the line is on the scale. Actually, this process can be categorised into stages:

Let’s say we want to get the highest precision measurement possible, what do we mean by this? Typically we will repeat this process a number of times and can take an average over the results. The average will be an estimate of the temperature, and we can also use the standard deviation to represent our uncertainty on this estimate. To get the highest precision measurement, we want our uncertainty on the estimate to be as small as possible. It turns out that there are a number of ways to do this, the most obvious being to keep repeating the process and the law of large numbers tells us that we will get closer and closer to the true temperature. Instead, we can also refine the measurement process – we could buy a better thermometer, we could dip the thermometer in the bath for longer, and we could make sure our eyes our properly aligned with the scale to minimise parallax error during the measuring stage.

Quantum metrology instead uses quantum probes, consisting of quantum particles, to carry out a measurement. Just like before, we want to prepare the best probe, interact with the system for the right amount of time, and do the best measurements to minimise our uncertainty on the estimate. The crossover to the quantum realm is so far quite unremarkable, at least when our probe is a single particle. If our probe instead consists of many qubits we can instead see two scenarios. In one scenario, we have a collection of completely independent qubits (left part of the diagram below), whereas in the other scenario we have a highly entangled collection of particles.

Which will give the best estimate of the parameter? Well, typically (in ideal conditions) a highly entangled state gives a much better estimate, and this estimate gets better and better as we increase the number of particles. The graph below shows a comparison between the two scenarios for various different particle numbers.

Entanglement, then, can allow us to do much higher precision measurements! So is this relevent in the real world? The quantum enhancements to metrology are actually an important part of the UK’s recent investment in developing quantum technologies, with the National Physical Laboratory having set up the Quantum Metrology Institute. It is thought that developments can “create a completely new class of advanced sensors and systems, with radically new capabilities for timing and navigation, communications, computing and other critical applications.” One particularly exciting area of science at the moment is the harnessing of quantum metrology for detection of gravitational waves.

Part of an experiment to detect gravitational waves, which uses the help of quantum metrology. (Image source)

And now onto my last paragraph, if you’re still following then well done! I’ve explained that quantum entanglement is crucial for metrology, but what work have we actually done in the group that might contribute to understanding this link? As mentioned earlier, in my most recent paper we find a way to lower bound the entanglement, which can be done in a multipartition dependent and independent way. One multipartition independent way is a kind of worst case scenario, where we check if there is entanglement present in all of the partitions and quantify the so-called genuine multipartite entanglement as the minimum entanglement of all these partitions. We find a way to lower bound this genuine entanglement, which has been shown to be a very relevant quantity in a lot of quantum metrology setups.

So, that’s it – hopefully I have highlighted the important links between the more theoretical area of quantum entanglement and the more technologically relevant area of metrology.

Here are some useful links about quantum entanglement:

Some useful links about metrology and the connections to entanglement:

I'm a final year PhD student at the University of Nottingham working in quantum information theory.
View all posts by trbromley →
This entry was posted in Entanglement, Quantum foundations, Quantum research, Superposition. Bookmark the permalink.

9 Responses to So, what are you researching? Connections between quantum entanglement and metrology